This Is How: ‘From The Veil Shot To An Intimate Moment’ by Melissa Suneson 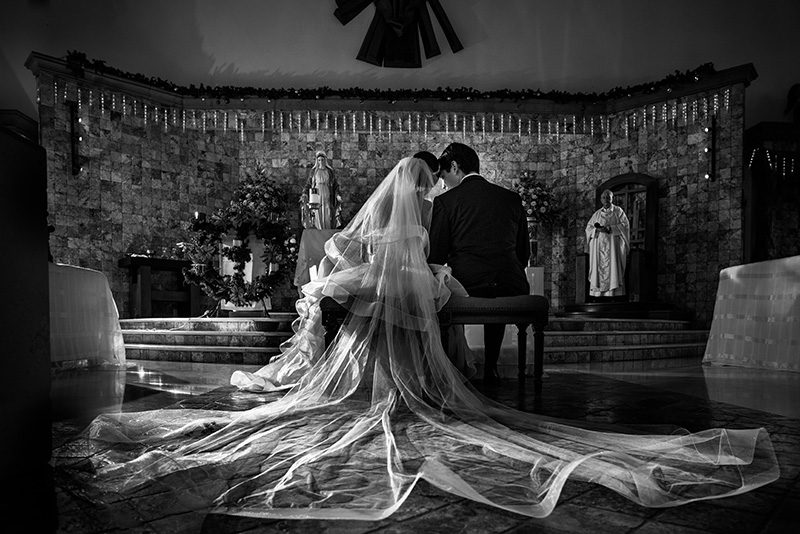 Excited to have the fantastic Mexico-based TiR member Melissa Suneson of Car & Mel Photography on the site today, taking us behind the scenes of this beautiful capture for our ‘This is How…’ series of pieces. Melissa’s advice about patience – how waiting just that little bit extra can really elevate an image (in this case from a ‘detail’ shot of the veil, to a beautiful moment) – is priceless.

I am based in Puerto Vallarta, Mexico; what used to be a fishermen’s village in the 60’s has turned out to be an international beach resort destination thanks to movie director John Houston who filmed the “Night of the Iguana” which was nominated for the Academy Awards for best cinematography and best art direction; featuring Ava Gardner and Richard Burton who brought Elizabeth Taylor to the set, and whom he was going to marry shortly after. With all this and throughout the years Puerto Vallarta has grown and developed so much that is now one of the top locations for beach destination weddings in México, having couples from the United States and Canada all the way to Australia.

With this background I am a “destination wedding” photographer, I do not travel that much but my couples do, 95% of my couples are the ones doing their destination wedding here, and most of them have their wedding ceremony and reception at the beach in a resort, at a villa or a combination of both. The other 5% which are mostly Mexican or from Mexican backgrounds living abroad that have their wedding here have their ceremony at a church; so church weddings are rare for me.

This wedding was one of those rare weddings at a church and another rare one for me was that the bride had very long and beautiful veil. Having elements I do not encounter in most weddings I was excited to see what would turn out. Once I got at the church I saw I needed to set up a flash as it was a time of the day where natural light and the lights of the church were both competing for their “not working for you” scenario. I only set up one off camera flash as I had driven with the bride and her father and had no more time to set another flash before the processional started. Talk about rushing at weddings, this was one of those times!

Once the mass started I felt I was ok with that single flash, the time came for the chorus with the Mariachi band and would last some 2-3 minutes, it is when I decided to get a veil shot as the mother of the bride had fixed it for her very neatly and I knew I wanted a shot of those veils I don’t get very often. So I went in back of the bride and groom and started building the shot, first shot was just ok but I noticed the videographer on the left as well as my flash, something I didn’t want in my shot, so I went a bit lower to hide them and it still did not work out, got another shot which was good for what I wanted. But still I stayed there a bit more. 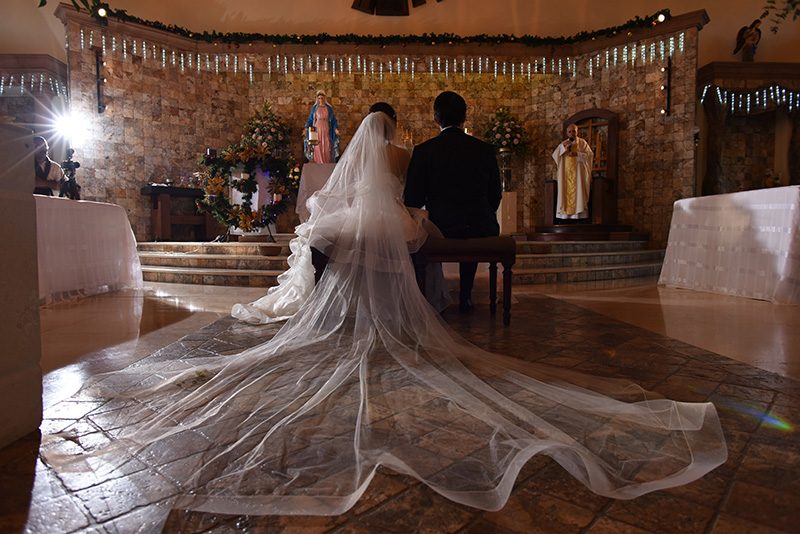 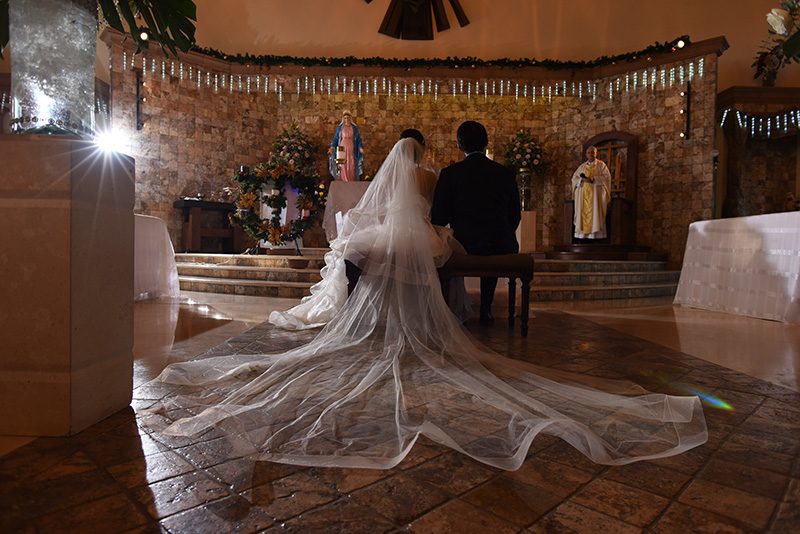 The bonus I got for staying there to take 2-3 more shots, instead of just settling for what I had already gotten, was that suddenly the bride and groom had a little intimate moment between them when I saw them tilting their heads towards each other, so for me that was the shot, otherwise it would have been just a nice shot of the bride and groom sitting down with the long veil I wanted to get, but having that little moment made the image more meaningful with their gesture, once I got it I knew I had something special instead of what could have been just another standard shot from that perspective.

With this, once again it comes to be true that sometimes staying a bit more after we think we have the shot can pay off with a better image. Sometimes it works sometimes it doesn’t but we never know if we don’t try and be patient in the crazy wedding environment we always work in, trying to capture all the safe shots, other times trying to be more creative paying attention more to a composition than to a moment, but sometimes in between it all we will be able to get that more meaningful shot that we can be happy and proud of.

You can see lots more of Melissa’s work on her website, or here on her This is Reportage profile.

Also, if you enjoyed this piece, you may be interested to see more of our ‘This is How’ pieces.