This Is How: ‘The Wedding Singer’ by Anthony Lyons 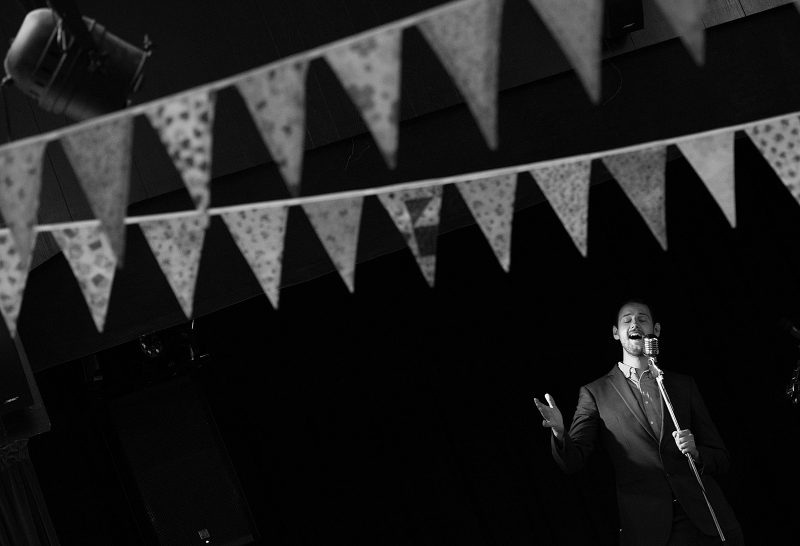 It’s always fascinating to hear how our TiR members capture their fantastic images, and today is no exception, as we have the fab Anthony Lyons telling us all! Great insights on his lens of choice for this particular capture – and why it’s more than OK to use a zoom! – utilising the available light to his advantage, his thought process about he wanted the final image to look, and detail on his post-production (including a before/after comparison).

One of my favourite images from Tessa & Pauls 2016 wedding in Somerset.  The couple got married in the ruins of an old abbey and later held the celebrations in a local village hall. The hall was very nicely decorated with bunting and fresh flowers. I was quite impressed by it all, the couple had obviously put in a lot of effort. They had also hired a wedding singer, Lewis Hutton, to be on stage while they sat for the wedding breakfast. This is usually a time I chillout and have a break but if there’s a shot to be had or something going on that comes first.

To capture the singer the lens of choice was the….70-200!!! I know it’s a zoom! Outrageous! It was actually perfect for the job. The guests were all packed in close together which made it difficult to get in close or place myself between the tables. Plus, I didn’t want to be too distracting and annoy the guests by getting in amongst them while they were eating. With the 70 to 200 I was able to stand at the back of the hall and pretty much get the shots that I wanted.

I was also just using available light. Lewis had a blue spotlight on him coming in from above and to one side of the inside of the stage, which was fine as it was not over powering. I knew I would be able to use the light from the spotlight to good effect.  It was all acceptable and I was able to fire off a few shots. Ultimately though I wanted an image that illustrated a crooner on stage under the spotlight singing his heart out.

Above the stage the rigging had the meatier unused spotlights hanging down. These look great and I wanted to try and incorporate them into the shot so they looked like they were lighting the singer. The rigging looked a bit messy. I wanted a clean shot!  I didn’t want anybody’s head sticking up or somebody walking across in front of the stage. It proved impossible to achieve a shot without a guest in the frame so I had to take the shot with the thought of cropping in post-production.

With the chosen image I was able to get in close and shoot above the heads of all the guests, isolate a spotlight and the bunting also looked right. I exposed for the blue spotlight on Lewis and waited for him to get into the zone. I think it was a Frank Sinatra number that did it but I can’t be certain.  It only took a couple of attempts to get the shot I wanted.  The image below is how it looked straight out the camera: 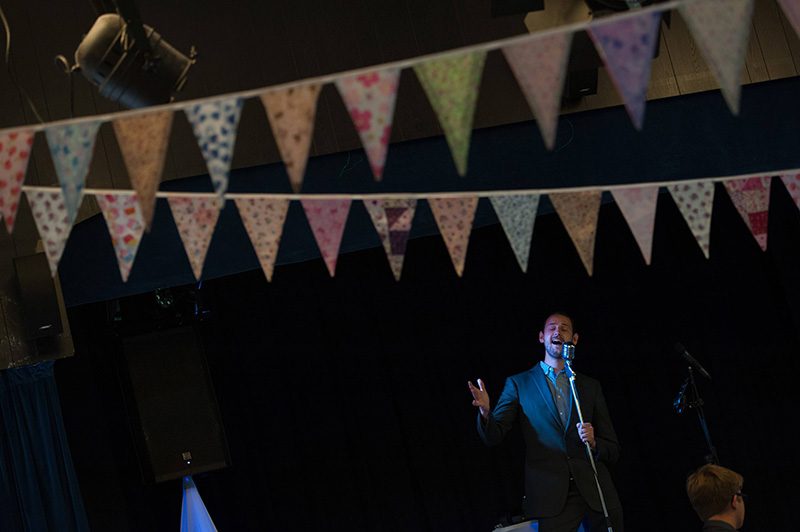 For the final image I cropped the frame slightly to remove the head in the bottom right and also the blue-lit pyramid speaker stand in the bottom left. I turned the image to black and white, adjusted the highlights and upped the contrast a little and that was it. I love the balance and the way all the elements come together. Simple but effective!

Thank you very much to Alan from TIR for giving me the opportunity to talk about my work. I have really enjoyed revisiting this image. Also, an honour to be included alongside other fantastic photographers. The quality and variety of documentary photography on this site is just simply amazing.

View more of Anthony’s work on his website, or over on his This is Reportage profile.

Like this post? We have lots more documentary wedding photography tips and guides by our TiR members over here.

Would you like to join us? View all the benefits of membership and sign up over here.