This is How: ‘Cigarettes and Alcohol’ & ‘The Call Back’ by Patrick Mateer 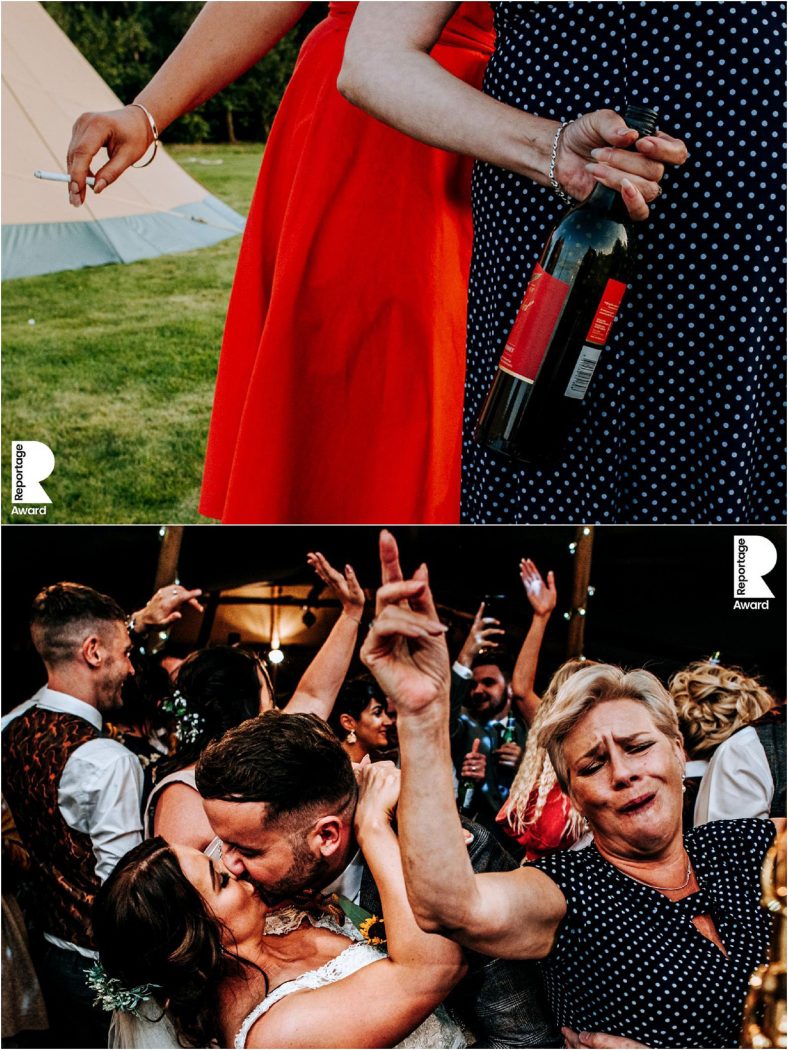 Thrilled to bring you a brand new ‘This is How‘ piece today, and it’s a double-header, as the fab Patrick Mateer reveals how he captured two Reportage Awards from the same wedding.

This is a really in-depth piece – thanks so much Patrick! – with lots of insights into things such as reportage details, colour, composition, the power of cropping, contrast, capturing the dancefloor, the first dance, shooting close, visual ‘call backs’, observation, context, and more…. 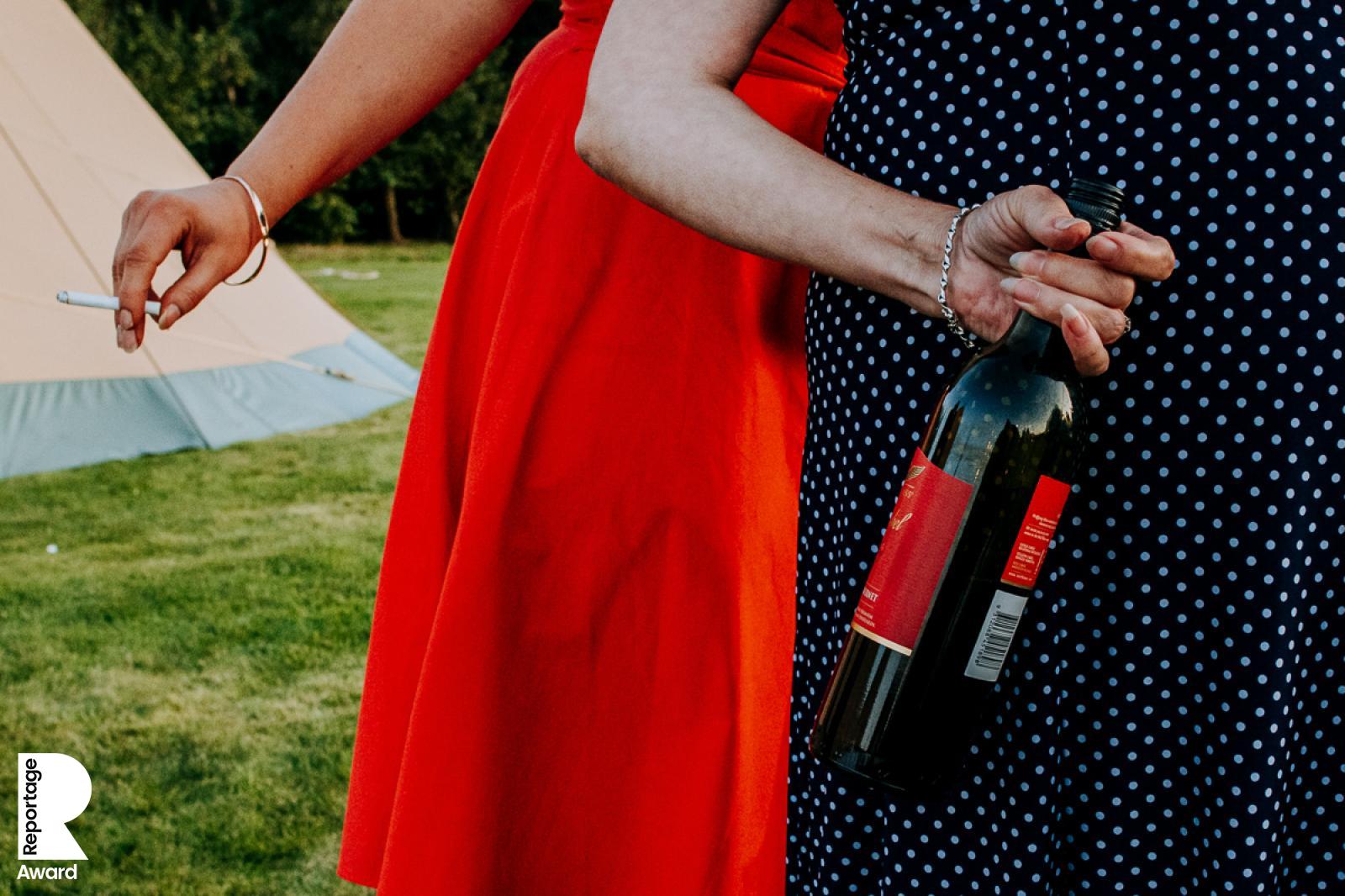 These two photographs – both ‘This Is Reportage’ winners – appear very different but, despite their contrasting look, one leads directly to the other. They are from a wedding in Yorkshire, not too far from our home. It was a beautiful church wedding which didn’t hint at the wild party that was to follow.

After the ceremony, we went on to a marquee, in a large, rather non-descript field. The landscape was flat with a few hawthorn hedgerows and an adjoining campsite which was quiet at the time. The couple had made their guests’ enjoyment a priority and the day was first and foremost a party, providing me with a continual stream of opportunities for lively and arresting photographs. There was northern soul music, garden and fete games, lots of alcohol and several absorbing – and keenly contested – games of ‘beer pong’, bringing the wedding guests together and creating a really relaxed atmosphere.

The first photograph ‘Cigarettes and Alcohol’ is an example of what is often referred to as a “detail in context” in the wedding photography world; I first heard this phrase used by Alan Law. We – myself and Hollie – have found ourselves calling these “reportage details” – a phrase used by our friend Adam Johnson to describe some of our work. We liked this turn of phrase, so it’s stuck. Over the years, reportage details have become a recognisable stylistic feature of our work.

We have picked out more and more idiosyncratic traces of weddings with our reportage details. Images of things that were a lived, active part of the day: flowers in the hand, champagne glasses carelessly tilted, shoes being put on or kicked off, a buttonhole being pecked at by a crow, a coat used to cover a wedding guest from torrential rain.

Looking beyond our own work, you will see reportage details in many ‘This is Reportage’ winning stories. Then look again, beyond wedding photography: from William Eggleston, Joel Meyorwitz – to name two masters – to contemporary street and documentary photography. Great photographers use ‘the telling detail’ as a way of expressing something about a much larger subject, place or issue – or sometimes just to tell a visual joke.

In this instance a group of guests were involved in an exuberant game of ‘beer pong’ and there was plenty going on with facial expressions, body posture, hand gestures and a lot of noise. But what made this image was two women together, the expanse of their dress colours, their arm and hand positions and the bottle. Sometimes I present final edits of reportage details as they were framed in camera; in other cases, I crop. In this instance, I cropped the extraneous away: ‘off with their heads’ – and off with their legs.

It’s sometimes difficult to explain just how much a photographer sees and considers looking through the lens – it’s a lot. But afterwards, looking at the raw images you often see more and understand more fully what was partly an intuitive response at the time. There might be an opportunity to crop the image – to reframe in terms of composition and subject. You can ‘re-frame’ an image, but you can’t change what you record; it’s a matter of selecting what you show. You can therefore change or amplify what you want to ‘say’ with your image, by cropping.

In this case I have cropped so you see the contrast of the dresses – vibrant high key red alongside dark blue with small pale blue dots and an area of green grass, with the corner of the marquee slightly out of focus. This created the basic composition of three vertical areas. One woman’s arm is twisted behind her back, the other’s held away from her body. One holds a cigarette; one holds a bottle of wine, the colour of the label on the bottle echoing the colour of the other dress. Both have bracelets – one gold, one silver. The woman holding the wine is seemingly hiding it from view, even protecting it.

The main objects in the image – the cigarette and the wine – provided a very obvious pop culture reference for the title, ‘Cigarettes and Alcohol’, emphasising the humour – particularly if you know your 90s Britpop. But after the humour, the lingering thought is with the bottle hidden from view. While my photograph has revealed the hidden, the viewer is left wondering, ‘Who is it hidden from’ and as with all still photography, ‘What happens next’? 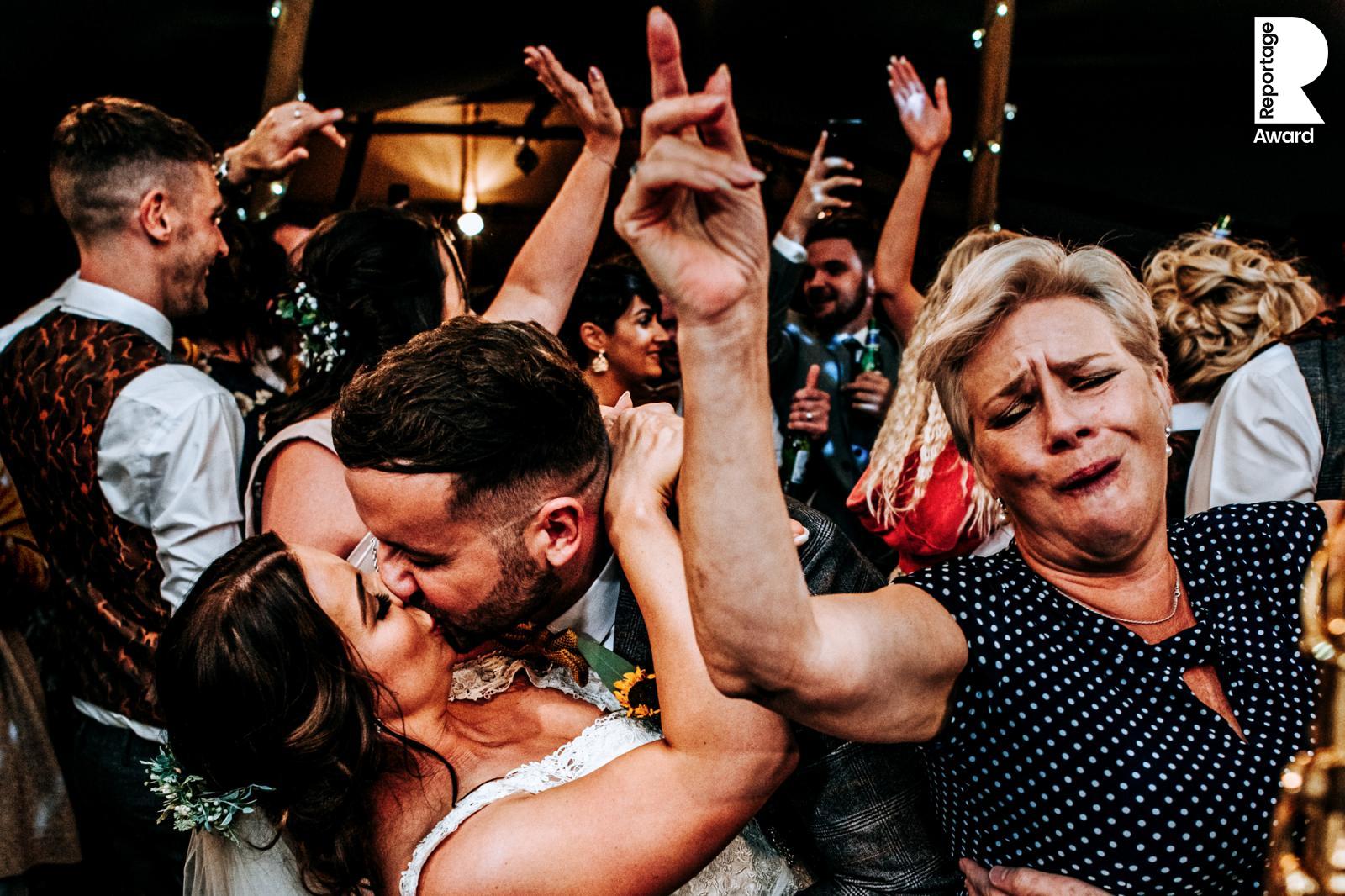 The second image carries the story forward. The bottle of wine is gone, shared around as the ‘beer pong’ concluded. The guests have moved into the marquee and the party is underway. Replacing the questions everything is out in the open and on show. The bride, the groom, and the guests are in full party mode. New bottles of wine can be glimpsed in the background as revellers revel.

Usually, when photographing dance scenes, I have to wait some time for things to take off, before the really good stuff ‘happens’. But this image is from the first dance, the couple having got everyone up and the scene suddenly exploding into life. As each wedding day progresses, guests become accustomed to me photographing, moving amongst them, capturing from far angles and close up and the same is true here. So though the floor was tightly packed, I was able to shoot quite freely.

As a documentary wedding photographer, I have learnt to observe what is happening, to read the ebb and flow of the event, to identify characters and relationships between people as the wedding day unfolds and build on them without interfering or directing – sometimes I can even predict a moment.

In this case I had become aware that the woman in the polka dot dress was a character who, having a great time and being expressive in her movements, might photograph well. It’s like a comedian using ‘call back’ in their comedy routine; referring back to a line of dialogue or a character through the rest of their act and building a rapport with their audience. For the photographer it is visual ‘call back’: characters, colours and objects like bottles and dress patterns.

As the guests joined the couple on the dance floor, I was immediately aware of the woman in the polka dot dress – she was completely lost in the music. I just needed to get more context for the image to make it really come alive. Of course, a first dance is one of those times that kisses flow more freely – the music, the wine, the intimacy, the moment. So, I knew a kiss between the couple could happen. I manoeuvred myself around so I could see the couple and waited until she came close to them. I saw the arch of her arms, the eyes-closed expression on her face, the couple swept up in their favourite song the music and the joyous intoxication. Then, they kissed – and everyone’s hands went up as the music blared.

This image was cropped in post-production, but only very slightly. The woman’s raised arm is closest to the picture plane and perfectly central, the extended forefinger nearly touching the top frame. The couple dip forward almost touching her. My lens, at eyelevel, compresses the space across the dance floor with a narrow aperture creating a frieze-like effect beyond the figures in the front. The whole composition tightly packed like a jig saw, as the dance floor was that evening. The fragments creating a visual dance as the viewer moves around the image never able to rest – one thing leads to another – the dance goes on.

The two images show different aspects of the wedding at different times of the day and are pictorially quite distinct. With visual ‘call back’ – a character, a polka dot dress, bottles of alcohol and expressive arms and hands – the trajectory of the day is revealed. The seeds of the second image started to form as soon as I took the first.

View more of Patrick’s work on his website, or This is Reportage profile.

We also interviewed Patrick on our Podcast.

If you enjoyed this, check out all the rest of our wedding photography tips – we have over 116 ‘This is How’ pieces just like this, with expert photographers from all over the world sharing exactly how they captured their images.

Our wedding photography podcast is also a great source of advice, tips and inspiration.