This Is How: ‘Champagne Circus’ by Adam Johnson 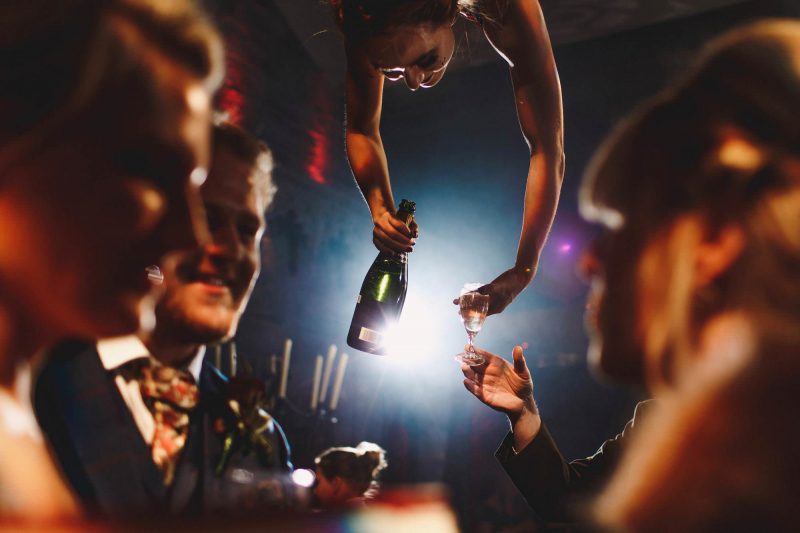 In the thirteenth of our regular series of ‘This Is How…’, the brilliant Adam Johnson (who is also one of our Collection One Reportage Award and Reportage Story Award Judges) gives us his thoughts on exactly how he got this striking capture.

Hannah and William had themed their wedding ‘theatrical’ and when I was chatting to them in the build up, I asked them what they were looking forward to the most. They told me it was their aerial champagne waitresses when they arrived at their reception venue from the church. It was a surprise for their guests and they wanted amazing photos of it and their guests reactions to it.

When we arrived at the venue, I was shocked at a) how dark the room was and b) how the only ambient light was red spotlights. I could’ve shot it like that and embraced the ambient but that’s not really my style and I wouldn’t have felt like the resulting images looked like mine. I had to quickly think about lighting because I didn’t have long – the waitresses would be up there for about 30 minutes and the light outside was beautiful but fading (it was a sunny late afternoon in early spring) and we still had to do some couple portraits. So there was lots running through my mind. I knew I had to cover the waitresses quickly but it had to be artistic and well lit, while also giving the couple time to enjoy it and see their guests react live, but I also had to make sure we got outside before it went dark!

I ended up with three off camera flashes balanced with the ambient to still retain the dim, theatrical vibe of the venue. Once I had my lighting looking how I wanted it, I just played around as much as I could as quickly as I could. I lay on the floor, got close, backed off. I tried to get the bride and groom in context with the waitresses as well as some of the best guest reactions to it all. I’ve included some more of the shots that I delivered to the clients to show the others from the series because just this one shot alone wouldn’t have been enough for the couple in my view: 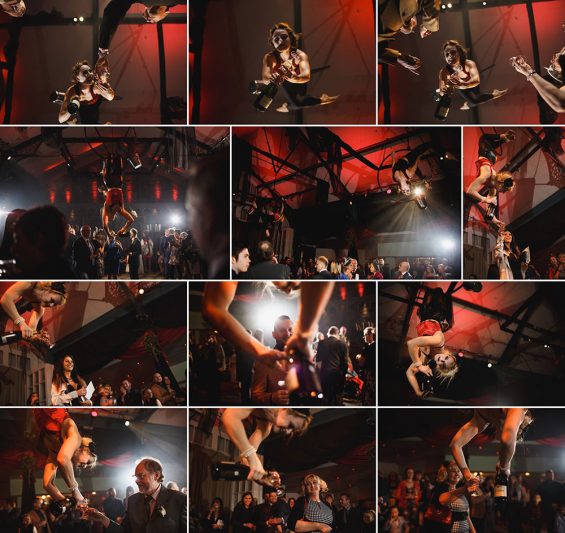 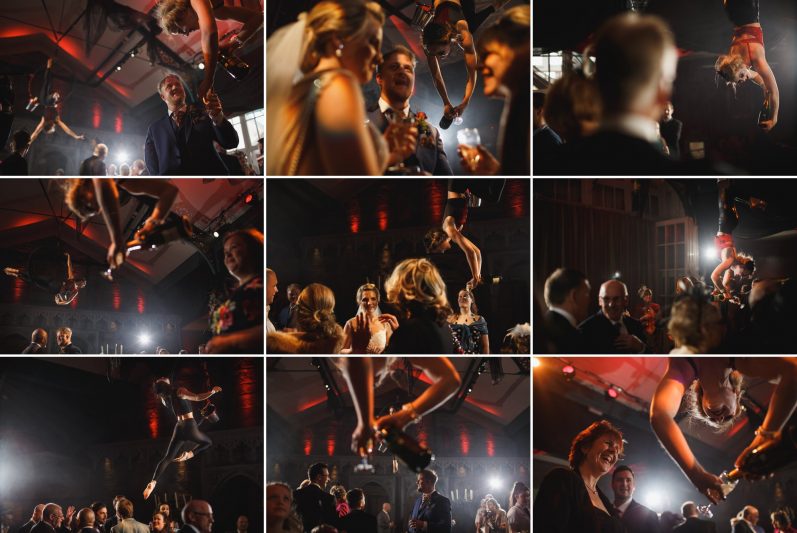 It would have been enough for me on a personal artistic level. I love it immensely. But it’s ultimately quite a selfish shot and pointless as a long term wedding photo! It’s just an abstract photo of a waitress hanging from the ceiling. I think part of the reason this photo has received so much attention since I took it a couple of years ago is because it’s so abstract and you’ve really no idea what’s going on without explanation. It raises more questions than it answers which I love personally, but in 20 years are this couple going to look at this photo and feel anything?? Realistically not. Just my personal opinion anyway! I love it, but it’s pointless. But I love it. Should it be winning ‘wedding photography awards’? Possibly not, but that’s a debate for another day!

I’ve also included the ‘before’ RAW file so you can see the very minimal post-processing work done. Just a crop, some basic contrast/colour adjustment and a little dodge and burn to really draw attention to the bottle and hand: 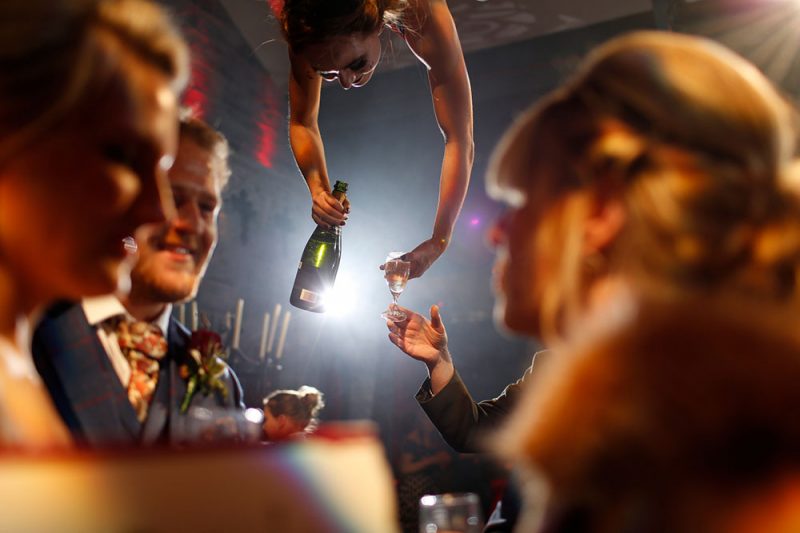 You can see more of Adam’s work on his website, and here on his profile on This is Reportage.

If you found this article interesting, we have lots of other ‘This Is How…’ posts by our TiR members over here.