This Is How: ‘Waiting For The Moment’ by Nikhol Esteras Roberts 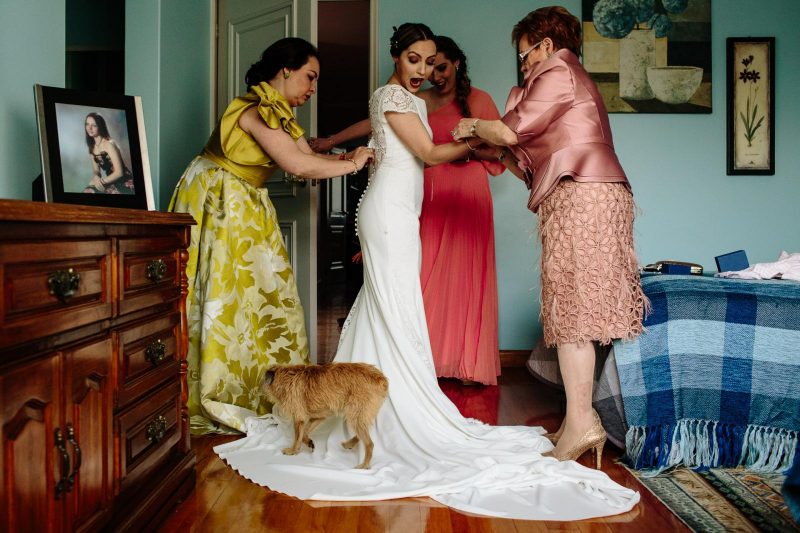 Delighted to have the brilliant Nikhol Esteras Roberts on the site today to tell us all about this brilliant capture. In the thirty-fourth of our ‘This is How…’ series, Nikhol shares her great insights into having a connection with her couple (and the benefits that brings), tips on taking time to observe and thus help predict future events, capturing personalities and relationships, composition, and waiting for the moment…

Montse and Luis were married in Tlalpan CDMX, the getting ready and location of this picture took place in Coyoacán, also in CDMX. We connected from our first meeting at a bar in Mexico City, where they brought Gigi (the dog pictured here) and from that moment, I knew we were going to make some great pictures together on their wedding day. Not only did we connect in terms of work, but also in terms of life in general and now I’m lucky to call them my dear friends.

Documenting the getting ready process is one of my favorites times in a wedding, as it’s the perfect setting for raw and emotional moments. For me, when I first arrive and begin shooting a wedding, it’s important to get to know the people (and animals) present; it’s a time that allows for observation while shooting, which can assist in being able to predict behaviors for future moments throughout the day’s celebrations. Furthermore, in the context of this photo, being a dog lover myself, I was naturally drawn to the pup and knew from the start that I wanted to make a strong image with Gigi involved.

Throughout the getting ready process, I had been attempting to make an image with Montse and Gigi that showed their personalities and relationship. Observing Gigi in the hours prior to getting dressed had me convinced that she would likely do something unconventional, or perhaps the most conventional for a headstrong dog. Montse’s love for Gigi was evident, holding her in her lap during hair and makeup, and her family was also smitten with the pup, with the exception of her Grandmother – who surely loves Gigi too, just didn’t love seeing her near wedding preparations. Seeing these dynamics, I had an idea of potential possibilities for a picture with Gigi.

For this photo, I felt I’d need to find my light and composition and wait for the moment. I did not know if Gigi would make her way into the room as Montse got dressed, but I had a suspicion, assuming she was still waiting by the bedroom door, as evidenced by her various (unsuccessful) entrance attempts when Monste’s sister walked in and out of the room. So I found my composition and light as I crouched in the corner of the bedroom, back to the wall and began shooting, waiting for a moment to happen. I had a narrow space to shoot in: to the right were beds and to the left a dresser, so I couldn’t move horizontally if I wanted a clean composition while maintaining my illumination via the only light source in the room, a large window behind me.

Gigi had attempted to enter the room a few minutes earlier, but was turned away at the door, where apparently she continued to wait for the perfect opportunity to reenter (… or so I imagined). The bedroom door suddenly opened ever so softly and with the humans distracted in dress duties, in came Gigi, marching to the beat of a her own drum, she walked right in and over the train of Montse’s dress. Montse’s grandmother (right) screeched seeing the scene, to which Montse looked down seeing her sweet Gigi walking all over her train. That’s the moment I snapped here, Montse’s reaction to hearing her Grandmother’s shock and then seeing Gigi on her dress. I was prepared for it, which allowed me to capture the only moment (that I observed) with a facial reaction to Gigi’s no nonsense personality.

It’s quite a satisfying feeling to know that this picture exists. A good amount of thought went into making this frame, but the moment was all its own, the perfect reaction to an unexpected situation. I love this picture because it’s authentic, it tells a story on its own and transmits that story to the viewer. But most of all, it makes me happy to know that this picture will always be with Montse, that moment she shared with her adored pup on her wedding day that captures Gigi’s loving, curious and (very) mischievous personality.

You can see more of Nikhol’s work on her website, or on her TiR profile.

For more ‘This is How…’ pieces by our This is Reportage members, have a look over here.