This Is How: ‘Two Faces’ by Anna Poole 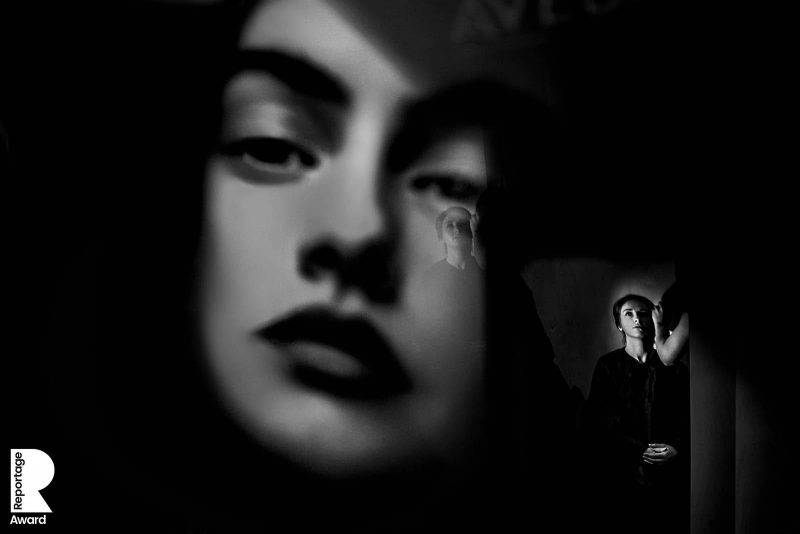 Honoured to have the great Anna Poole of Luna Weddings with us today, taking us behind the scenes of her recent Reportage Award (Anna actually won two awards in Collection Three; an incredible feat, with only the top 4% of submissions awarded worldwide). Really great insights into getting creative, spotting opportunities, off-camera flash, patience, persistence and more. Anna also shares other images from the series she took, as well as a SOOC file. So interesting; a brilliant read!

I love shooting prep and always make sure I have a few hours to play with prior to the point when everything starts to get a little more hectic.

Megan, the bride, was going to a salon in town for hair and make up, so I went along as I felt this was a good place to start the prep coverage.

I had about an hour and a half at the hairdressers and everything was running to plan and on time, so I I had a bit of time to get creative. Megan was having her make up done in a fairly tight corner and there wasn’t a lot of room for me without invading the make-up artist’s space. The corner wasn’t the most photogenic and my angles were very limited. I placed a gridded off camera flash about a metre and a half from Megan (powered at 1/128) as she had a wall behind her and I wanted to avoid fall off from the flash as much as possible. I don’t always use OCF for prep but the mixed lighting in the hairdressers wasn’t fantastic so I decided to in this instance. I started off fairly close (respecting the make up artist’s space) then started stepping further back to see what other angles I could work with. On the other side of the salon I saw a poster in a plastic frame advertising some kind of products and noticed the poster had a black background so I wondered if it was achievable to get a reflection in it, just to create something a little less literal. First I checked I could actually see Megan in the reflection and that the angle would work with my OCF position, it did, however the reflection in the plastic frame was pretty rubbish and quite distorted so I decided not to use it and used a hairdressers mirror instead, adjusted my angle slightly and fired off a few frames.

I didn’t really manage to get what I was after straight away, in-between the make-up artist being on the ‘wrong’ side, or blocking my flash, and guests coming in and out of the salon, it was difficult to get the frame I needed. I never stage the brush being in the ‘perfect’ place or ask the make up artist to change sides, I don’t like to direct or intrude as I prefer everything to fall into place and hope the planets align!

I left my flash where it was and kept coming back to it in-between documenting what was happening with everyone getting ready. I also wanted the image to have as few distractions going on as possible in the reflection, so I needed quite a few micro adjustments, to get everything lined up nicely. The mirror was also a little distorted but not enough to bother me too much.

After coming and going a couple of times, I had a handful of frames on the 85 and on the 35 to work with. Initially and in-camera I liked the 85, however when I came to my edit I preferred the 35. Also, this image I envisaged in colour, but it made a much stronger image in black and white as I could really bring the blacks up in my edit and remove distracting elements. I’ve included the images either side of the featured image, and also the 85 versions, just to give an idea of my thought process: 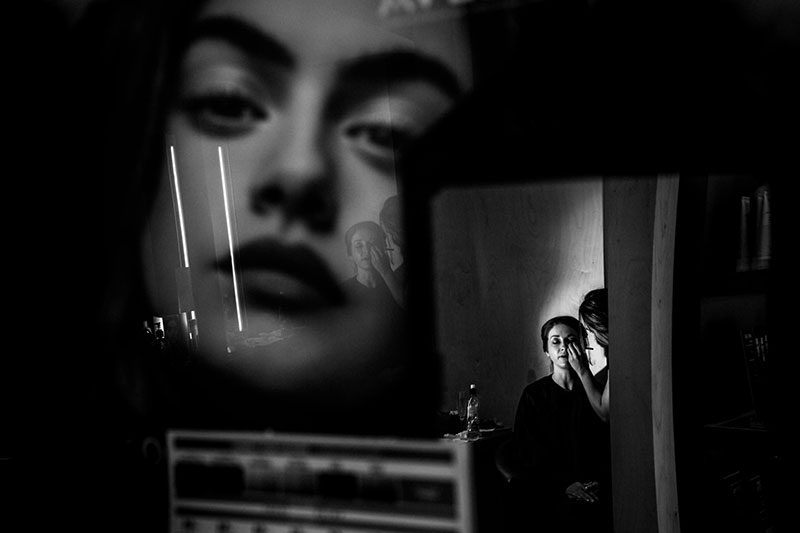 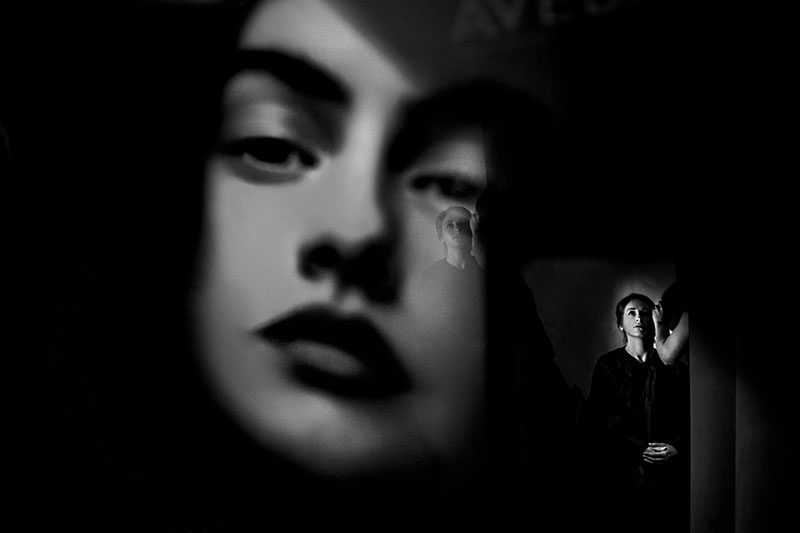 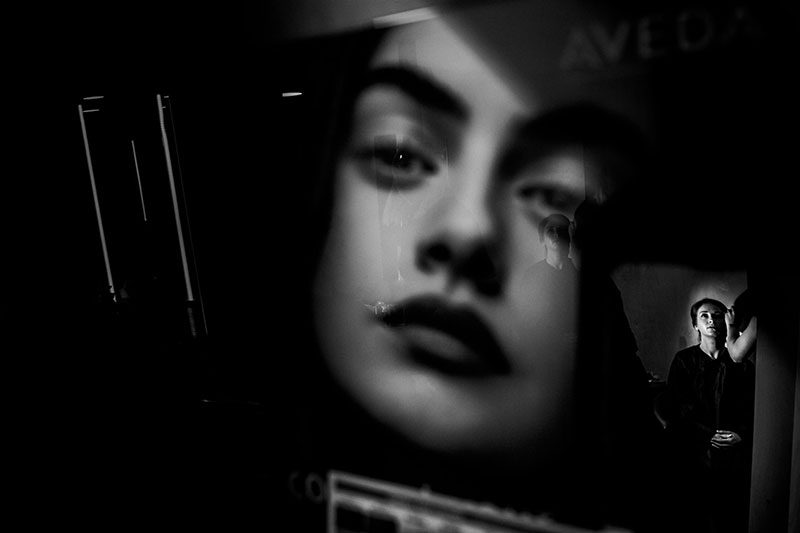 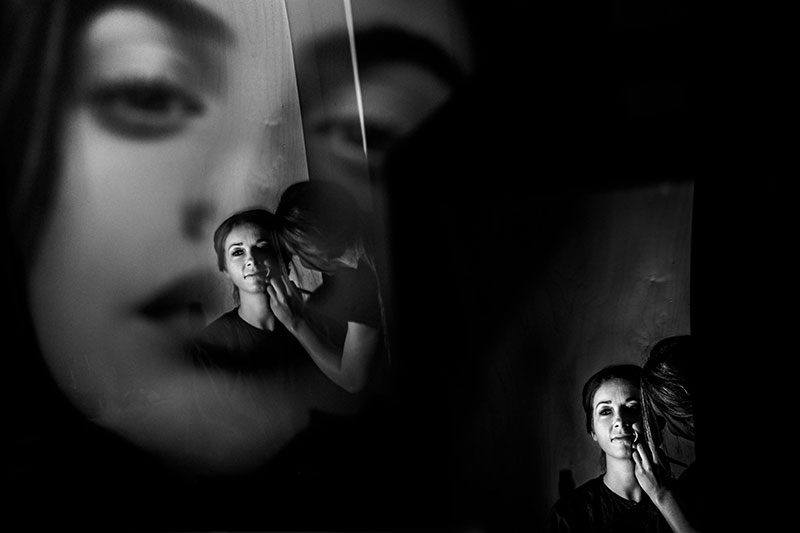 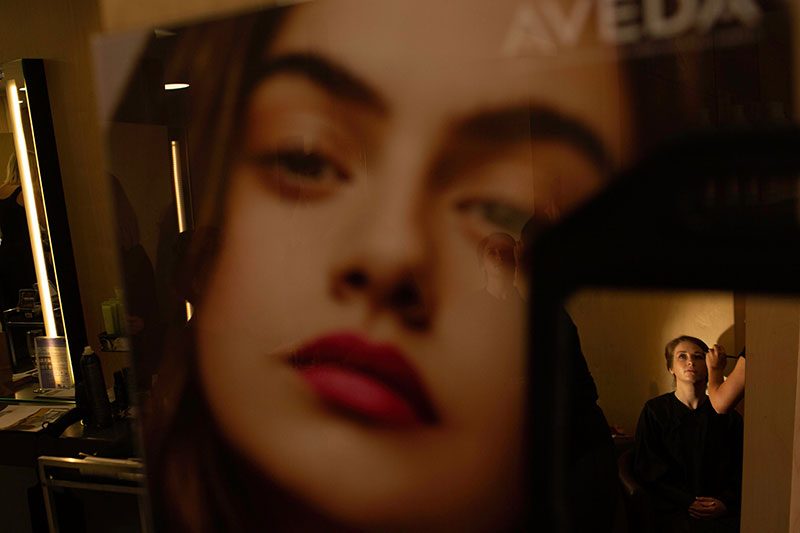 The above is a SOOC image from one of the series of images. Below is the Reportage Award-winning image:

You can see more of Anna’s work on her website, or here on her TiR profile.

Did you enjoy this piece? We have lots more ‘This is How…’ articles by our members over here; can’t recommend them enough, such a wealth of knowledge and tips shared!

Interested in becoming a member of This is Reportage? See everything that membership gives you over here.