This Is How: ‘Smokin’ Grandpa & The Furious 3′ by Christoforos Mechanezidis 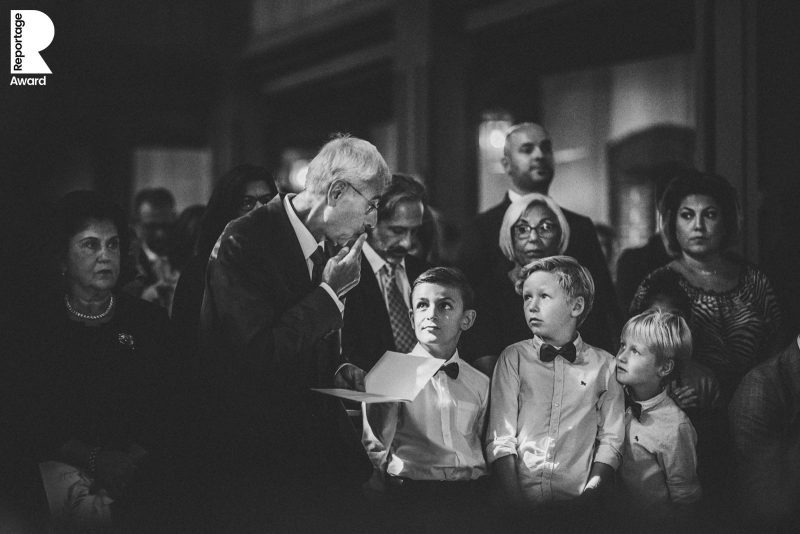 Honoured to have Christoforos Mechanezidis on the site today, telling us exactly how he captured this Reportage Award from Collection Six. This is a fantastically detailed piece, with Rossi going into real depth about his thought process and technique, including lots of great insights into observation, intuition, and much more…thanks so much, Rossi!

There are certain moments on weddings, where strange things happen and where you ask yourself later questions like „how the hell did this happen?“ and „why didn’t I see the humour in this picture in the first place?“ and in the end it’s one big question: „Was i just lucky? Or is there something else?“

To be honest, this is quite the first time I was asked to write about how a certain shot was done or better said, how it was developed and evolved. And to be honest, it´s the first time, too, that I really tried to answer the question „how did you do this?“ in a more „deeper“ way than just a technical one.

So as I´m quite a chatterbox, I see this „How to“ also as a possibility to practise avoiding getting carried away and rambling on. 😉 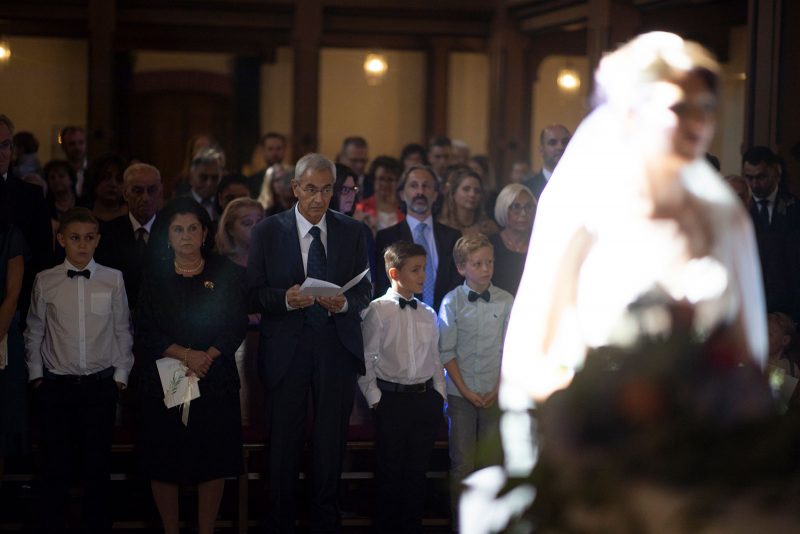 I saw these three boys – the „gang“ – and it was quite clear, that they wouldn´t be that quiet at all during the ceremony in the church.

But what really made me able to finally capture the shot was, that the pastor was one of the super coolest pastors I have e v e r met! I was totally free to move anywhere I wanted, even behind the altar (we all know, that this often is a very delicate aspect for some pastors). Minutes before I took the shot with the „smokin´ grandpa“ i was standing on the pulpit, shooting from above – when the pastor waved to me and indicated me to come down from there. The guests later told me „Ooohh, so the pastor didn´t want you to shoot from above there? Was he mad at you?“ But I could appease the guests and told them „haha, no, don´t worry! He just wanted me to come down to shoot from his position, because he said, the light which fell through the windows was so beautiful!“. Oh, I really loved this pastor!! 😀

So when I came down, I first concentrated on the bridal couple, but the light was much too harsh yet, so I let my eyes wander around and this was where I spotted the antsy boys next to the groom´s dad in the first row in the background.

After some more shots of the couple (which didn´t work yet out due to the too harsh light) and a quick pan to a singing woman in the back of the church above I quickly turned back again to focus totally on the boys and the grandpa for the next minutes and not on the bridal couple at all. I just k n e w, something would happen. I just had to wait for it. 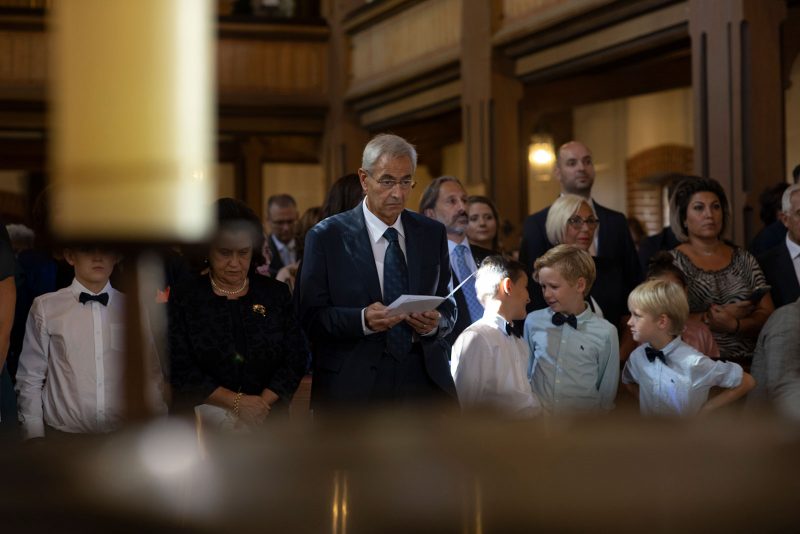 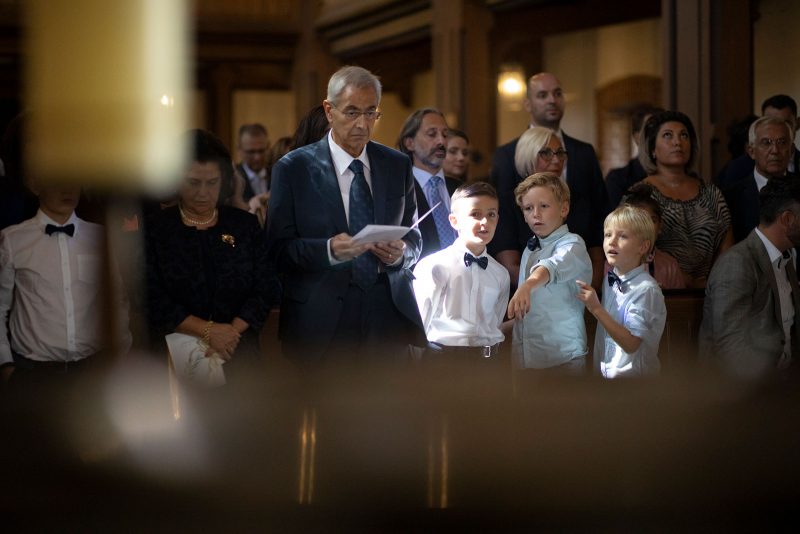 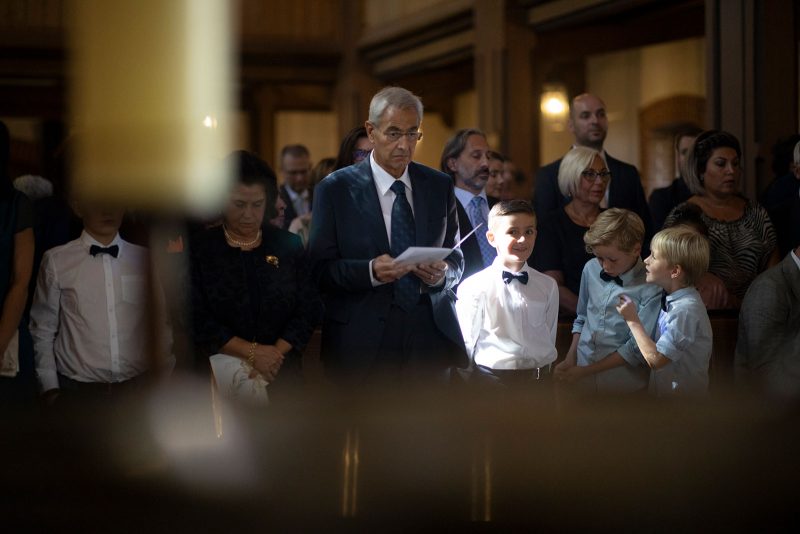 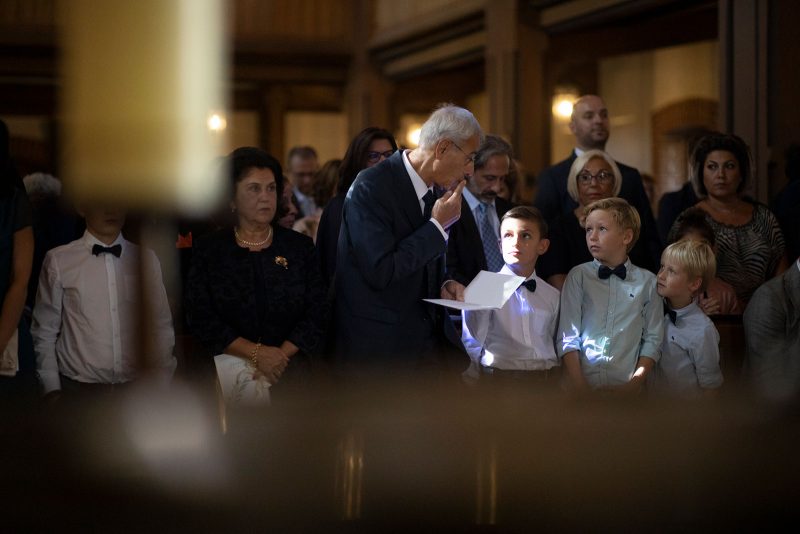 The groom´s dad just had enough and asked the boys to „shut up“ 😉 I knew, this was the shot!

But at this moment, I yet didn´t see the 2nd „layer“ yet, which gave this picture that hilarious certain something. At this point, I didn´t expect, what potential was hiding in this shot…

The rest of the wedding turned out to be as fantastic and full of emotions, as it started with the ceremony. Unfortunately I wasn´t permitted to show a whole story of the wedding (I knew this before), but in the end i was permitted to show a maximum of 15 selected pictures (but also not as a connected story). I always tell my couples – even if it isn´t allowed to show the whole story – that for me as a photographer, it´s super important to at last show some few pictures! Think of it as a sprinter, running the 100m below 3 seconds. And nobody sees it! So i was happy like a squirrel on Speed, when I got the permission to show this picture!

By culling through the pictures, I knew that I would edit this shot in black and white only! These are shots where colour would disctract from the scene itself much too much and where I just don´t even try to edit it in colour at all, but immediately in black and white. Thanks to the wide dynamic range of my Canon 5DMK4 I was able to recover the quite harshly lit face of the boy next to the grandpa.

I developed my black and white preset by myself, but there are no big secrets behind it. Sometime back in 2017, when I changed a lot in my photography business, I just started experimenting with a free colour preset, which I even don’t remember where I found it. And this also was the base for the then developed black and white preset. Until then I didn´t work with Lightroom at all – don´t ask why, I have no idea why, i was just stupid and edited all raws as exported tif-files in photoshop… 🙂

So here we have the 1st edit without any specific detailed editing yet: 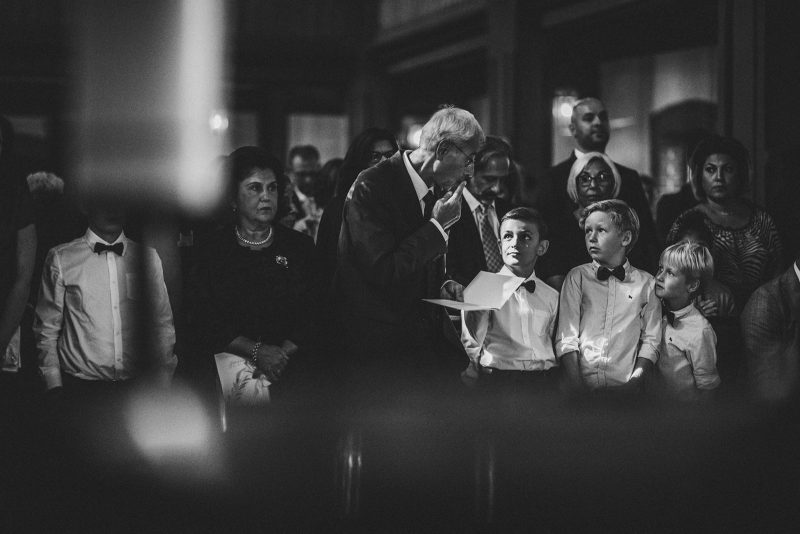 As said, I was shooting from right behind the altar and used its surface with the slight reflection to… yeah, well I just don´t know, why, haha. It just felt right, there was no further idea behind it (sometimes not everything has a meaning :))

Nevertheless, the 1st edit was okay, but I didn´t like the candle in the left and also the boy in the left was quite distracting with its white shirt. So i cropped this part, and then I got this: 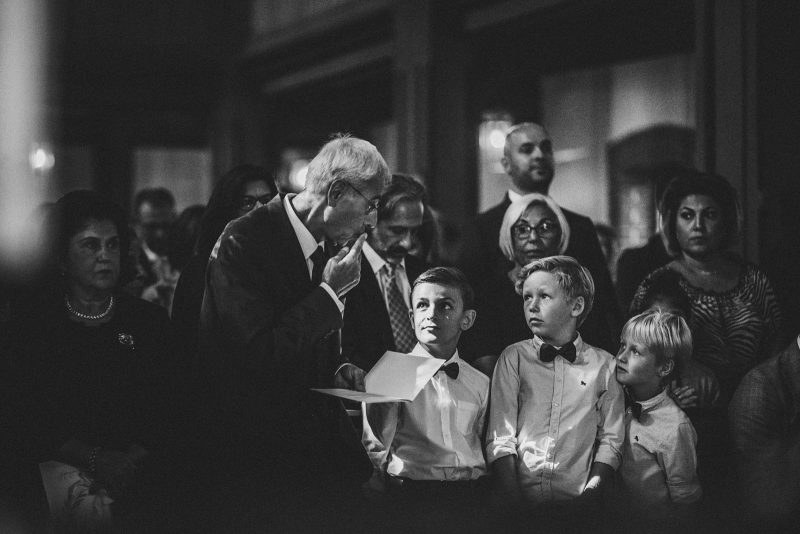 Still I was annoyed by the unsharp candle in the left, and I wanted the faces to be a bit more defined, as everybody was looking to the kids and the grandpa – so I dodged some parts in lightroom and burned the part with the candle in the left.

…here are the burned parts…. 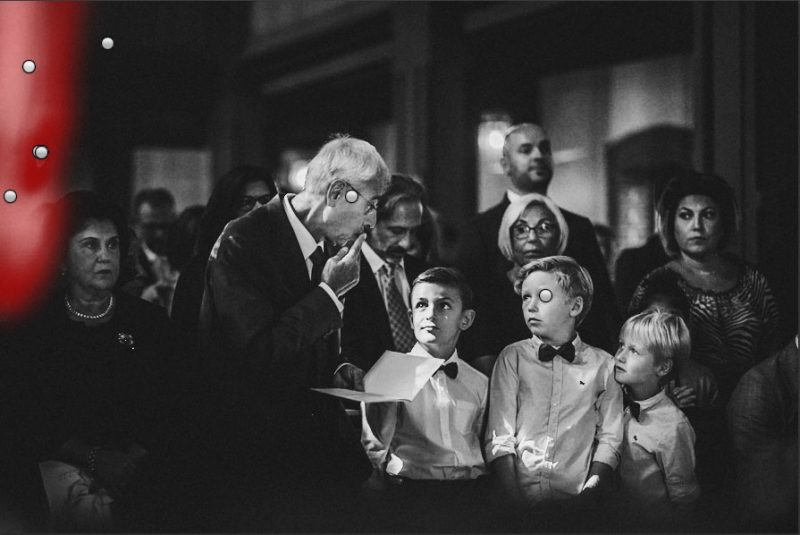 …and here the dodged ones: 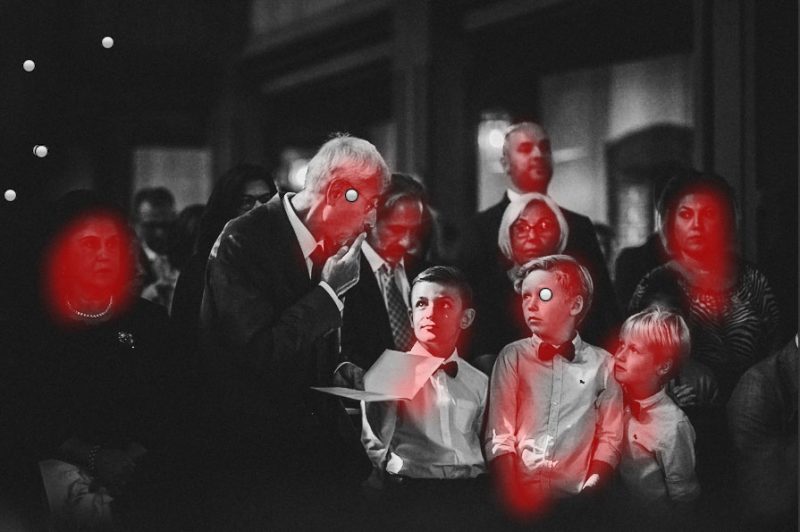 And for those who are interested in the detailled preset specs, here they are: 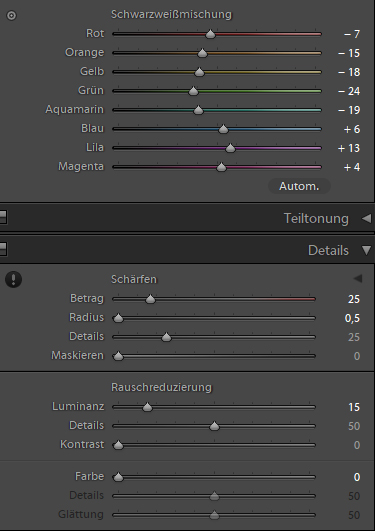 So as you can see, I am turning the edit wheels quite extreme in some way. I just love hard contrasts, but also an organic black and white, which never is totally 100% black. Therefore I also use a gradation S-shaped curve which creates a slight „matte“ finish and connect this with a slight grain, which supports the organic feel of my „Rossi-look“.

And so, in the end, this was the final edited version: 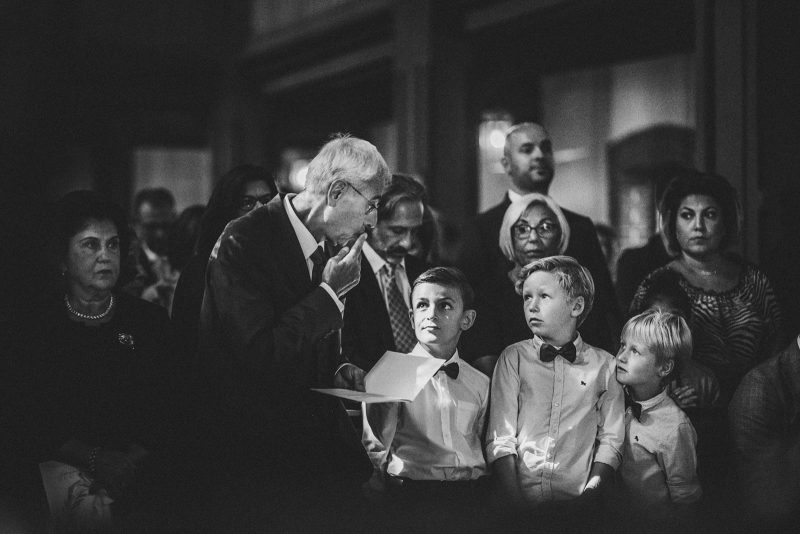 And now comes the funny part. If you didn´t see it yet, take a closer look. What is grandpa doing there? Wait…. he´s smoking a Joint, isn´t he? Right in the church? Wow, he really got some guts!!

Of course, it was NOT a joint! It just looks like he´s smoking one. It´s the white shirt collar, which creates this hilarious optical illusion… 🙂 What I maybe even love more is, that the reactions in the faces around are fitting totally to the „Joint“-layer! I just love it, everything fits together! Fun fact: I didn´t see this 2nd „Joint-Layer“ at first. Even after i edited it! Just after some colleagues posted a lot of funny smileys and eyetwinkering comments under the published picture on my Facebook site, I started to look closer to it. And then I also spotted the „Joint“. I was just blind!! Lol!

What did I learn in the end and by going through this process? First: Stay focused! When you spot a scene, which hides potential, just wait! Keep observing and don´t focus only on the couple or the obvious things. Just focus on that specific scene. And be patient!

There are so many hilarious moments waiting out there, and they are waiting for us to capture them! And one thing more, which keeps me thinking all the time: Is there really a thing called „luck“? Does coincidences really exist? I´m not so sure about this. I´d rather say, there are no coincidences and there is no luck at all! But what is it then? Fate? If I learned something in the past two years, since I changed my way of seeing things and documenting weddings in a much more unobvious way as I did before, it would be this: In the end it´s all about just letting yourself go with the flow – and just hard, hard work. Which results from observing, observing, and observing. And: Think less. Feel more. 🙂

I hope, you enjoyed my „This is how“!

Of course I´m happy about any feedback! If you have any questions, just contact me!

You can see more of Rossi’s work on his website, or on his This is Reportage profile.

Enjoy this piece? We have lots more wedding photography tips and guides by our members.

Interested in joining us? We’re all about showcasing the documentary-side of your work; telling the world just how important real moment-capturing is. Members receive lots of benefits, including 60 Reportage Award and 18 Story Award entries per year, a profile with an unlimited number of images/Stories, exclusive discounts/deal on wedding photography-related products/services, and much more. See all the benefits and apply for membership over here.