This Is How: ‘Ringbearer in Washington DC’ by Bradley Hanson 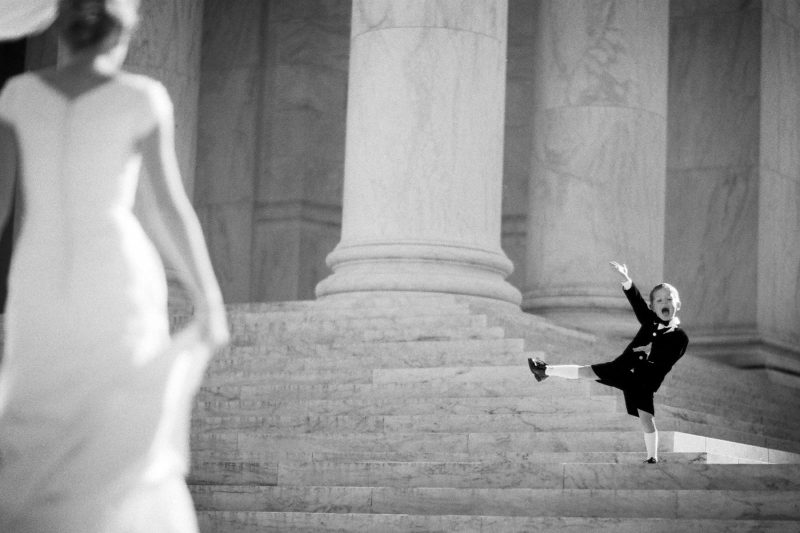 In the eleventh of our regular series of ‘This Is How…’, US-based photographer Bradley Hanson tells us how he got this great image – and on film, no less!

This image is probably the first shot I think of when it comes to defining my style and the way I work. The wedding was in Washington DC in 2008, and at the time I lived in Seattle. I was walking with the bride and groom and some of their family, getting photographs of them walking around the areas by the National Mall and Washington monument. It was a windy autumn day, and we were walking up the steps of the Lincoln Memorial. I was shooting both digital and film at the time as the digital cameras had poor high ISO performance and dreadful dynamic range, long since addressed in the current state of affairs.

Since my first Leica in 2000, an M6 with a 50mm Summicron lens, I have preferred shooting with prime lenses. There are a number of reasons for this, but primarily because it allows you to “learn” specific focal lengths and pre-visualize your final results. The secondary benefit is that prime lenses are smaller, lighter, sharper and let in more light than their zoom equivalents. When I say “pre-visualize,”what I mean is you know, well before the camera is to your eye, what will be in the frame. For that reason, I always recommend new photographers get ONE lens, preferably a 50mm rather than a zoom, to learn to “see”at that focal length. This makes composition a lot easier because you learn to see the world through a specific lens or lenses. When you know exactly what will be in the frame before the camera is at your eye, you will see photographs unfold right before your eyes because you can see them in progress.

With this strategy that I started in the year 2000, I have always carried three cameras with me, one on each shoulder and one around my neck. The position is always the same so I can rely on muscle memory and respond instantly when I see something develop in front of me. My left shoulder is a wide angle (usually 35mm), around my neck is the normal lens (currently a 55mm), and my right shoulder carries the short telephoto, currently an 85mm lens. 90% of my work is with the normal lens, but the wide and telephoto are available as needed instantly. No need to zoom, and there is greater control over depth of field because I am shooting at f1.2, f1.4, f1.8 and f2 rather than f2.8 or slower as you’d have in a zoom.

With the photograph above. I was walking with the couple toward the monument. It was a bright, sunny day, but the height of the building cast a long shadow in the background, with sun hitting the bride just to my left. Suddenly, the ringbearer appeared in the distance in the right side of the frame, fortunately, in a tiny sliver of light in an otherwise cloudy frame. Because I have been shooting with prime lenses on specific locations for so long, I immediately reached for the telephoto on my right shoulder, a Leica 90mm Summicron lens, previously set to infinity. In that moment, it felt like time stood still. I could see it was a once in a lifetime moment unfolding in front of me. I grabbed the right lens based on the distance the ringbearer was from me, and focused manually as quickly as possible. Because the image was film (Kodak Tri-X 400) and I was working in shade with a fully manual camera, I had already set the exposure to f2.8 at 1/1000th, the fastest shutter on a Leica M6. I always overexposed with film to get more grain and contrast, overdeveloping (aka “pushing”the film) to further enhance contrast. The film was developed and scanned by Panda Labs in Seattle, and I got my scans back a couple weeks later.

I have used nearly every kind of camera and many formats. No matter what I am shooting with, whether it’s medium format film or my iPhone, I am still me and I see the world a certain way. I take the same photographs, regardless of the tool. The differences in one camera and lens to another are way down on the list of priorities compared to getting emotionally compelling images. When I looked at the final film scan from this image, I could see that with the long 270 degree throw of the 90mm Summicron lens, I had just missed the peak point of focus, but the image is acceptably sharp and it was a beautiful moment that will never happen again.

You can see more of Bradley’s work on his website, or here on his profile on This is Reportage.

If you enjoyed this post, we have lots of other‘This Is How…’ posts by our TiR members over here.